Do I know you? Should I know you? Would it be convenient for me to know you? No matter; just drop a comment and say hi.

Hey there, gang! How's it going? It's been a while.

Over the past day or so, a lot of people have been posting eulogies for Steve Jobs. A lot of other people have been posting criticisms of those eulogies, pointing out that he was an asshole, he was a billionaire, he didn't give much to charity (compared to, say, Bill Gates), and so on. And, as far as I know, that's true. By all accounts, he certainly could be an asshole. I actually grew up near Cupertino, probably a few blocks from where he had. In high school I had teachers who had taught both Jobs and Wozniak, and by all accounts, yeah, he was _always_ kind of an asshole. The one thing that troubles me, though, are comments to the effect that he "just" created consumer products. 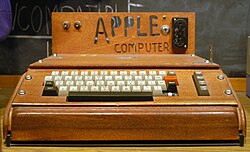 Look, in order to understand what Jobs did, you have to bear in mind where he started. He started at the very cusp of the personal computer revolution, back at a time when you couldn't even really buy a computer -- although if you were extremely geeky, you could buy a kit and solder one together yourself. Jobs helped Woz market a computer that was remarkably innovative for its time, yet required comparatively little expertise on the part of the owner.

That early success, in turn, allowed them to turn around and release the Apple II, one of the first PCs accessible (both technically and economically) to schools and middle-class families, and one of the first PCs to convince large companies like IBM that there was a market there at all. Jobs isn't the reason that we have personal computers, but a convincing case could be made that without him, it might have taken several more years to get where we are today.

Apple didn't invent the GUI, either -- but Jobs had the foresight to realize its incredible potential, and he had the force of will to direct Apple to release the first truly accessible GUI-centric computer.

NeXT didn't invent Unix, but it made Unix vastly more usable and useful, and in its current incarnation -- OS X -- it is now not only user-friendly (a feat in itself) it is arguably *the* most user-friendly OS, on both desktop and mobile devices.

PIxar didn't invent computer animation, but Jobs took the company when it was floundering and pushed it forward, ultimately demonstrating the viability of computer animated films and advancing the development of that entire industry.

Apple didn't invent the MP3 player, or even the hard-drive based MP3 player, but Jobs saw how seamlessly a person's MP3 player (and digital devices in general) could be integrated with a their PC and with the internet.

Apple didn't invent the online music store, but they created the first one that had a lot of titles available DRM-free.

Apple didn't invent the smartphone, but how many people did you know who had one before the iPhone?

Apple didn't invent the tablet -- although they arguably did a lot of work in that field years earlier, with the Newton -- but again, they popularized it. It's still a little early to say how that one's going to shake out, but it looks like it has a lot of positive implications for industries that traditionally relied on print.

In all those cases, Jobs and his organizations placed a premium on engineering, usability, and industrial design. It was clearly something he sincerely valued. Not everyone can afford to buy his products, that's true, but his products forced the competition to respond. He dragged multiple industries forward in his wake. He didn't give us anything we didn't have or couldn't have had. He wasn't a great humanitarian. And, to be honest, I feel kind of weird about praising him as much as I have here, because I have very little patience for people who use their authority to treat to their underlings poorly. But despite all of that, the fact remains that we're probably about ten years further along than we would have been without him.

Take any one of those items on its own, and sure, its just a "product." Take it all together, though, and there is a very clear theme which emerges. Jobs was an asshole, absolutely. But he was also a man who had a vision of ubiquitous, powerful, accessible technology that people could easily use to improve their lives. I'm sorry, but that's the way forward. It *has* to be. We have so dominated the planet with technology, so completely intertwined it with our species' fate, that we *have* to humanize it, have to make it sane and understandable and, where possible, fun. If our technology is going to empower us, we have to bring it up (and in some cases, down) to our level. Jobs got that.

Time passes. I find myself somewhere in this town -- somewhere I love, even if I've allowed myself to forget that -- and my mind can't help but drift back to five, maybe eight years earlier. To a time when it was utterly different, yet that era's fingerprints are all over this place.

I feel like some sort of displaced native historian, some sort of refugee. I feel lonely and alone and lost and intrusive and distant and present and respectful and casual and, somehow, lost, yet at home.

Posted via LiveJournal app for iPhone.

I just ate some chips, and

choulipatches noticed that I had some in my beard. So I decided to blog about it.

So there it is. I am now officially that guy who sits around, blogging with chips in his beard. I am That Guy.

But if you had that kind of time -- would you do it? Would you give it a try? A kind of/This kind of DOING both TAKES AND GIVES TIME -- makes live the dead hours inside us.

This is where I've been lately:

And for your further amusement, here are dozens and dozens of firespinners in the procession to the effigy:

I may post a few thoughts about it once I've had a few days not to do much of anything...

Hey, does anyone know if there are any fire spinning groups/practice spaces/get togethers near New Braunfels (or at least closer to New Braunfels than Austin)?
Collapse